Meditating on Modernist Architecture with Mies

Ludwig Mies van der Rohe is the master of modernist architecture. This is, of course, an architectural style that many could easily do without. Mies’ black box steel-frame buildings have no intricate details or Greek columns; their interiors have no marble staircases or glimmering mosaics. So what’s the big deal, right? Well, Mies essentially ushered in a new era of architecture in Chicago that had been growing in Europe for decades. We explore Mies’ architecture on our Modernism and IIT Campus Architecture Tour and the Chicago Architecture Tour for Design Lovers.

Bauhaus and the Birth of Modernist Architecture

Back in Germany in the 1920s, Mies served as director of the Bauhaus, the famous, innovative design school. When Nazis took power, the non-traditional, modernist architecture styles of the Bauhaus were rejected and the school was closed. The Illinois Institute of Technology wooed Mies to Chicago to be the head of the architecture department. How could one say “Nein”?

Modernist architecture is about simplicity, efficiency, and modern materials. The world wars resulted in technological advances in materials, like steel and glass. These advances changed the shape of buildings to have big windows, basic forms, and modern heating and cooling systems. Mies van der Rohe took these new technologies and added poetry to the visual form of his buildings. His mantra of “less as more” meant eliminating the superfluous details of early Chicago skyscrapers. The columns, pediments, or terra cotta ornamentation were just clutter. The beauty in Mies buildings lies in their clean forms, the natural light that flows in through giant windows, and the meditative repetition of stark lines. 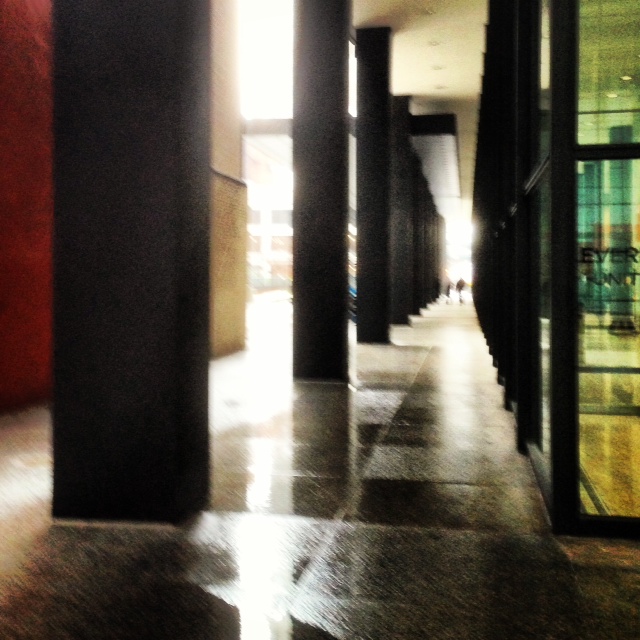 To engage with the genius of Mies van der Rohe in Chicago, you have many options. A great place to start is downtown with the three buildings of the Federal Center. The squat little box of the post office and the wide expanse of the Federal Center Plaza balance the verticality of the two black skyscrapers. As you look at these modernist buildings with their cutting steel grids, notice the way that the texture of their facades changes depending on your perspective. This beauty can only be found with the spared down simplicity of the modernist style. And just fyi, Alexander Calder’s “Flamingo Sculpture” was not originally part of the plan at all, but doesn’t its giant curve provide the perfect contrast to the hard lines of the modernist architecture around?

We glimpse it briefly during the Loop Interior Architecture Walking Tour.

Head along Michigan Avenue to check out the complex of Illinois Center. Inside these big black modernist boxes – you can’t miss ’em – they fluidly connect with the Pedway System. You hardly notice they are separate skyscrapers. Go another block north and on the north banks of the Chicago River, the looming IBM Plaza skyscraper, soon to be renamed AMA Plaza, wrestles with Marina City and Trump Tower for skyline notability. This crucial work of Mies van der Rohe is just off the Magnificent Mile. The Arts Club of Chicago has his “floating staircase.”

A little more northward still and you’ll encounter the 860-880 Lake Shore Drive Apartments. This two-building complex gazes out over Lake Michigan just north of Chicago Avenue. Built in the early 1950s, these towers clashed with the more historic architecture of the area. But tenants and landlords wanted architecture that fit with their modern lifestyles. So Mies was hired to design more apartment buildings, such as the Commonwealth Promenade Apartments that overlook the north end of Lincoln Park.

IIT is a Modernist Architecture Masterpiece

If you truly want a Mies pilgrimage, then hop on the green line CTA train for the 10-minute ride south to IIT campus. The Mies van der Rohe Society offers regular architectural tours of the campus. Mies designed the layout for the IIT campus as well as most of the buildings, including his seminal work of S. R. Crown Hall. Crown Hall, which houses the College of Architecture, is an inspiring open space where there are no fixed walls other than two simple supports. Mies put all the mechanics of the building, including the restrooms, in the basement so that the main floor would be eternally flexible space, able to adapt with the changing needs of an academic institution. Once you really start to learn about Mies’ approach to architecture, you realize that it is much more complex than the simplicity expressed in the buildings.