The “Madhouse” Architecture of Chicago Stadium

The old Chicago Stadium stood on the Near West Side for nearly 60 years until the United Center replaced it. Known as the “Madhouse on Madison” because of its rollicking crowds, the venue hosted the Blackhawks, Bulls, national political conventions, and even an NFL playoff game. Because of its architectural design, it had deafening acoustics and vertiginous seating. So let’s explore what made this Chicago Stadium so raucous. 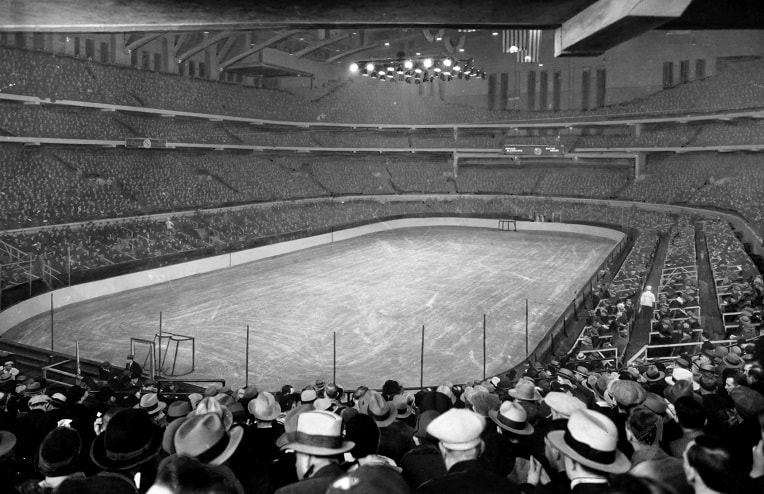 The Chaotic Architecture of Chicago Stadium

Chicago Stadium was the largest indoor arena on Earth when it opened in 1929. Its location was on the Near West Side of Chicago, about a mile from the Loop. Its steel trusses spanned 266 feet without supports in order to provide all the fans with unobstructed views. I once watched a baseball game from behind a steel beam at the old Tiger Stadium in Detroit, so I can appreciate a design that doesn’t give an unobstructed view.

The steel trusses of the Chicago had a big impact on the acoustics and atmosphere. They lent the stadium a vast uninterrupted space that was often described as barn-like. The architecture of Chicago Stadium, which was unique for its time, meant that the crowd’s cheering could bounce off the walls and ceilings. A massive 3,663-pipe Baton organ sound enhanced the noise. Played continuously throughout the games, the organ’s drone combined with the cheering to create a deafening cacophony. A yacht’s foghorn under the scoreboard celebrated when Blackhawks made a goal. Just thinking about the crowd, organ, and horn going at once makes my ears ring.

Chicago Stadium was also famous for how enthused the crowd would become during the singing of the National Anthem. The crowd actually drowned out the song by cheering so loudly during the 1991 NHL All-Star Game.

Noise wasn’t the only form of intimidation provided by the architecture of Chicago Stadium. The arrangement of the stands added a dizzying and overwhelming sight for visiting teams. The stadium had a triple-layer bowl design. And it was uniquely large for its time, but is pretty typical in stadiums today. Beyond the size, steepness of the stands was impressive. The second and third tiers were built almost directly above the bottom bowl. This meant that the upper decks felt directly overhead from the floor. This image from a political convention at the stadium gives a sense of just how vertiginous those stands were.

I found accounts from fans who said climbing that the nose-bleed seats were so high and steep that the stairs felt more like a ladder. Fans up there were infamously drunken and rowdy to boot. Games frequently stopped so that the players could watch the audience brawling in the upper decks!

A Venue from a Different Era

Other elements to Chicago Stadium  lent it an air of barely-contained chaos. It was the first stadium to use air conditioning, but the system barely worked so it was still stifling. It also used a confusing analog clock for timekeeping for a period of time. Each of the four-sides of the clock had four clock faces, which showed, respectively, the hour, time left in a period, and time left in a penalty. I cannot begin to imagine how confusing it must have been to see all four clocks running at once.

Of course, Chicago Stadium no longer exists. Crews demolished it in 1995, after the Bulls and Blackhawks moved into the newly-constructed United Center. The United Center is a modern stadium, built with corporate suites and spectator safety as paramount concerns. And it has a little more sensitivity to the acoustics! It’s a nice-enough venue, but it lacks the crazy magic of the original Madhouse on Madison.