Answers to Questions of Chicago History and Architecture

When does the Michigan Ave bridge open up?

As with all of the city bridges, opening the Michigan Avenue Bridge is up to the Chicago Department of Transportation. It opens every year in the spring and fall. That accommodates all the recreational boats traveling to and from storage yards and harbors for the season. Careful not to impact traffic too much, these “boat runs” occur on a few select mornings in the spring and fall and each bridge lift takes 8 – 12 minutes. 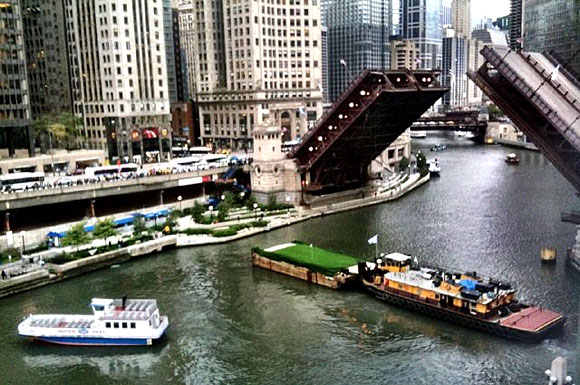 The fall season just began on September 15th. Every Wednesday it opens at 9:30am and Saturday at 9:00am until October 27th. It’s pretty cool to see the mechanics of it by visiting the Bridgehouse Museum, and if you go during the lift you pay $10 and they recommend advance registration. We sometimes get to see the bridge in action on the Chicago Architecture Walking Tour for Design Lovers.

How long did it take to build the current First United Methodist church?

The cornerstone was laid on November 6, 1922. The church’s dedication ceremony was held on September 28, 1924, per headlines from the Chicago Tribune. So just under two years!

What was in the box that was sent to Picasso to inspire the sculpture?

Despite a sculpture that some say represent Chicago, Picasso never traveled to our city. However the artist got a feel for Chicago from a series of gifts from one of the architects for the Daley Center, Bill Hartmann. A librarian at the Chicago Public Library referred me to an article in the Chicago Tribune from 1992  called “How Bill Hartmann Wooed Picasso and Won the Prize.” The article says:

“Hartmann brought [Picasso] gifts such as a White Sox uniform, a Bears jersey and a Native American headdress “to see the pleasure Picasso could take in them, as well as to stimulate his impressions and feelings about Chicago. Hartmann also brought him a set of photographs of Chicago people and places.” 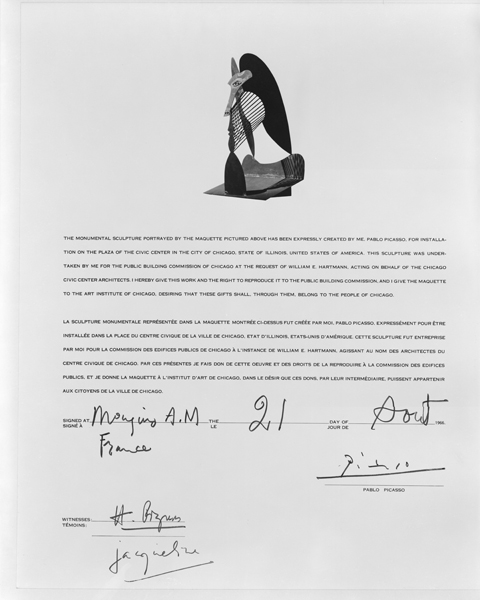 What happened to the Picasso fund when he refused it? How did that fund happen?

This one required some investigative journalism. From the Chicago Public Library’s website I found out that the funds for Picasso’s fee and construction of the sculpture came from three foundations: Woods Charitable Fund, Inc., the Chauncey and Marion Deering McCormick Foundation and the Field Foundation of Illinois.

I called the Public Building Commission for direction on what may have happened to the $100,000 that Picasso refused. Even though it happened so long ago, Mimi Simon, the Public Information Officer of the PBC, graciously dug into their old files and sent me a photocopy of Resolution No.189 dated July 26, 1966.  According to Simon, “the resolution authorizes a payment of $100,000 to Pablo Picasso for full payment.  We believe the check William Hartmann was carrying in August of 1966 was from the PBC.  Since this was the first project for the PBC the funds had to be from the bond issue for this building and would have gone back into the PBC construction fund.”

Looking forward to future questions about Chicago history and architecture! 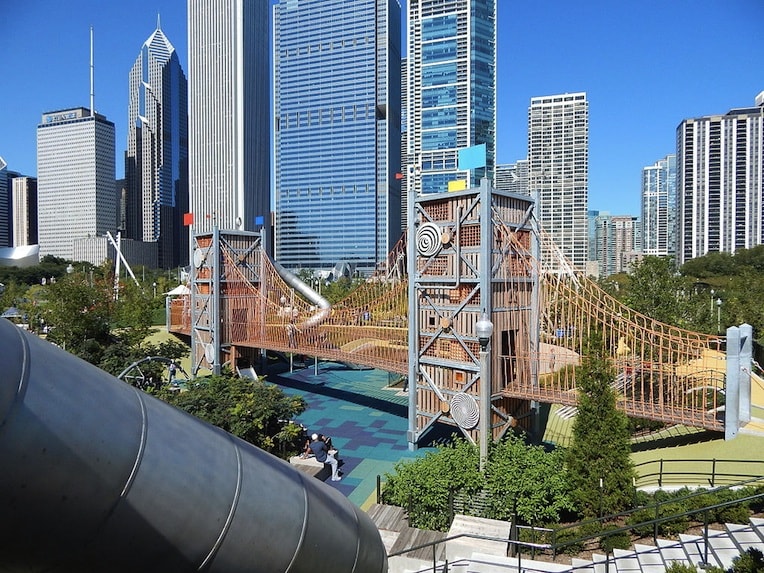 Five Kids Activities in the Loop for Spring Break 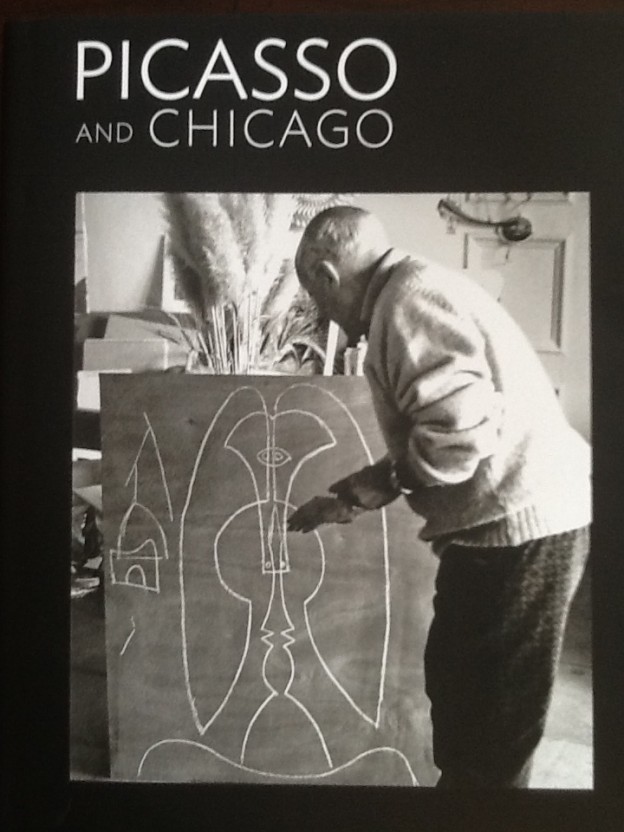 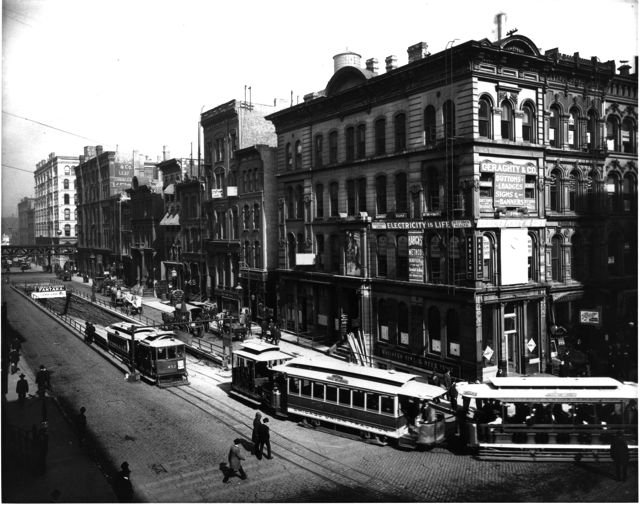 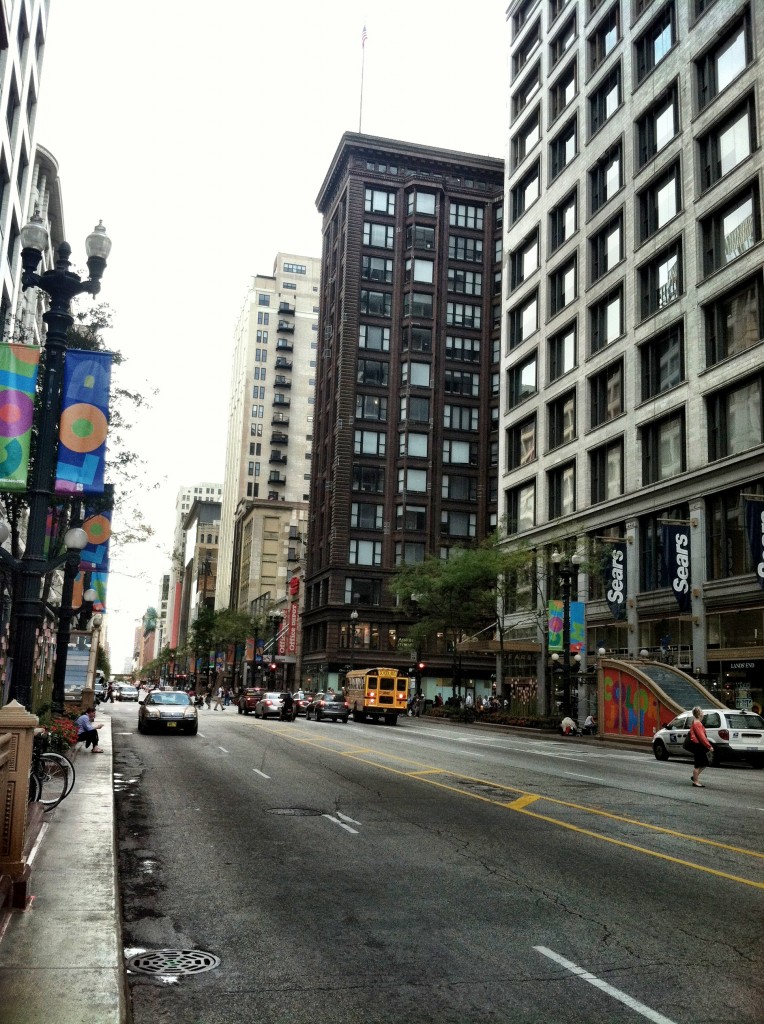