When most people hear “cable car” they think “San Francisco.” Yet for 25 years the largest cable car system the world had ever seen operated in Chicago, transporting more than one billion riders.

I discovered these facts and when I mentioned them to others, I was surprised to be frequently shot down. “Chicago never had cable cars,” people told me. So I persisted and went digging for more documentation, but most Chicago history books skip right over cable cars and move straight from horse-drawn streetcars to electric trolley cars. When I found an old colorized postcard in which an artist had converted the images of cable cars into trolley cars, I realized that cable cars had not only been ignored but in some ways had been erased from historical records.

Why Did Chicago’s Cable Cars Get Forgotten?

Why would anyone care enough to cover up a means of transportation? By the 1890’s cable cars were considered old-fashioned and rickety. They did not match the modern image Chicago boosters and developers were trying to project of Chicago as a technologically advanced metropolis.

Also, cable cars have just been overlooked because many historians do not study transit history thoroughly enough to recognize the significant differences between various forms of streetcars—and why they matter. And it’s been hard to pull attention away from San Francisco, which seems to have a market on the cable car story.

Cable cars were important to Chicago because they provided residents the best transit available anywhere in the world; helped the city grow and develop; stimulated the economy with an investment of $25 million ($600 million today); and generated civic pride. To find out how, you’ll just have to check out my book!

An Ideal System for a Booming City

Chicago proved that cable cars could carry huge numbers of passengers on flat terrain, even in a cold climate, and they kept expanding the cable car system. Other cities quickly followed suit, and by 1893, a total of 29 cities had cable car systems. Despite tremendous enthusiasm for this new mode of transit, the electric trolley—with its overhead electrical wires—unceremoniously eclipsed the cable car. It simply was far cheaper to build.

Chicago’s cable car era ended in 1906. In its 25 years of operation, Chicago established itself as the city with the world’s most advanced transit system.

While the history of the rise and fall of Chicago’s cable cars seems all but forgotten, you could tour Chicago to uncover remnants, including former powerhouses, car barns and even a waiting room. No Chicago cable cars were preserved, but two replicas exist—one at the Museum of Science & Industry and one at the Illinois Railway Museum. 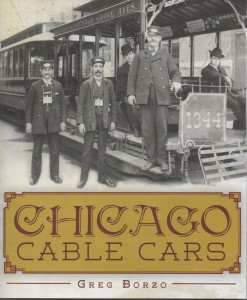 Join me for a presentation of my new book at 7:00 p.m. on Thursday, February 28, 2013, at The Book Cellar, a great independent bookstore ( 4736 N. Lincoln Ave). I’ll be presenting historic images, and you’ll learn how important Chicago’s cable cars were to the city, and of course you can indulge in wine, beer, coffee, soup or dessert.