A Global Hub: the History of Chicago Transportation

A week ago, countless locals and visitors passed through Chicago during their Thanksgiving travels. According to a recent article, nearly a million people had a seat booked at O’Hare during the week of Thanksgiving. Whether they knew it or not, as they stood in line or waited for lift-off, those passengers were part of the history of Chicago transportation. That’s a theme we’ve always taken care to emphasize in our custom private tours and original content.

The city’s unique confluence of geography, history, and industry made it a transportation hub from the start. Even Chicago’s first European explorers could foresee that. Though I doubt they foresaw a million air travelers. Kinda hard to fathom that in the 1670s.

Waterways are the key to the history of Chicago transportation. The Chicago Portage is the small watershed which separates the Chicago River from the Des Plaines River. The former flowed to the Great Lakes and thence to the St. Lawrence River and North Atlantic. The latter is part of the enormous Mississippi River system that eventually flows out to the Gulf of Mexico.

One of the first Europeans to explore the region, Robert de la Salle  (yes, like LaSalle Street in downtown), noted that digging a small canal would link these two massive waterways. According to LaSalle, “[t]his will be the gate of empire, this the seat of commerce.”

It was dreams like that which lead to the foundation of Chicago. The city grew up around the construction of the Illinois and Michigan Canal, which started construction in 1836. The city was formally incorporated only one year later. From its start, Chicago was a city built around transportation.

Even today, the Port of Chicago is one of the largest inland sea ports in the world. Freighters from the Great Lakes and “salties” from the ocean call at our port to bring the grain, iron, and more to world markets.

1848 saw the completion of both the Illinois and Michigan Canal and Chicago’s first railroad connection to the East Coast. The natural resources of the Midwest meant that railroads were very easy to build here.

The iron and timber for rail ties and tracks comes from the mines and forests of Minnesota, Wisconsin, and Michigan. The coal to power the steam engines is the product of downstate Illinois and was shipped through the new canal.

Chicago became the metropole of Midwest because it had the ingredients to create this new industrial system of transportation. The rail lines, of course, wound up being headquartered here and they would all lead back to Chicago. The history of Chicago transportation wound up being dictated by its natural setting.

According to Curbed Chicago, eleven rail lines came into the city by 1860. Massive train stations and depots dotted the entire region. For the next century, the railroads brought the grain of the prairie, the timber of the North Country, the meat of the West, and the people of the world into Chicago.

Pigs & People in the History of Chicago Transportation

The famous Union Stock Yards, which gave Chicago the nickname of “hog butcher to the nation” was the offspring of the railroad companies. The profusion of railroad connections to Chicago and the invention of refrigerated railcars made our city into the national leader in meat production.

Of course, human passengers were just as important to Chicago’s transportation history. Immigrants from Europe in the 19th Century would often come to Chicago via the rail connections to New York City. During the Great Migration, hundreds of thousands of African-Americans arrived at the old Central Station, near the southern end of Grant Park.

During the 30’s and 40’s the Dearborn Street Station was a hot spot to scope out Hollywood celebrities. The Santa Fe Railway had service to Los Angeles. Major movie stars like Bing Crosby and Humphrey Bogart were often spotted at Dearborn and Polk as they journeyed to and from the city of angels.

Union Station, built in 1925, once handled more than 100,000 passengers a day in its ornate headhouse and now-demolished concourse. Passenger rail service fell off after the war, but Amtrak designated it as the city’s passenger railroad hub in the 1970’s. Union Station was the only one of Chicago’s many major stations to survive demolition and is still the 3rd busiest rail station in the country.

One of the major reasons that passenger rail service declined after World War II was the sudden rise of global aviation. Midway Airport has served Chicago’s flyers since 1931, but it could not expand to accommodate the huge numbers of jets and people taking to the friendly skies.

The new O’Hare International Airport opened in 1963 by President Kennedy. Building off of Chicago’s existing role as a transportation hub,  it became a hub for the world’s two largest airlines: United and American. By the end of the decade more than 30 million passengers per year would fly through O’Hare.

O’Hare was actually the single busiest airport on Earth for several decades. In fact, it’s still in 4th place globally. More than 76 million passengers came through the airport in 2015. That’s 28 times more than the population of Chicago! Unsurprisingly, parking at the airport can be a headache (check out O’Hare Airport parking before your next trip.)

O’Hare is such a global hub that some of the longest flights on Earth originate here. You can fly directly from Chicago’s far northwest side to Hong Kong or Delhi. Each of those trips is over 7,000 miles and last more than 14 hours. That’s a long time in the air, but think of how long it took the voyageurs to get to Chicago from France.

Moving People Into the Future

It’s difficult to say what the future of transportation looks like. Humanity went from horse-drawn carriages to the space shuttle in less than a century. Regardless of future developments, it’s safe to say that Chicago will play a key role in the country’s transportation plans. It’s the role we were born to play. 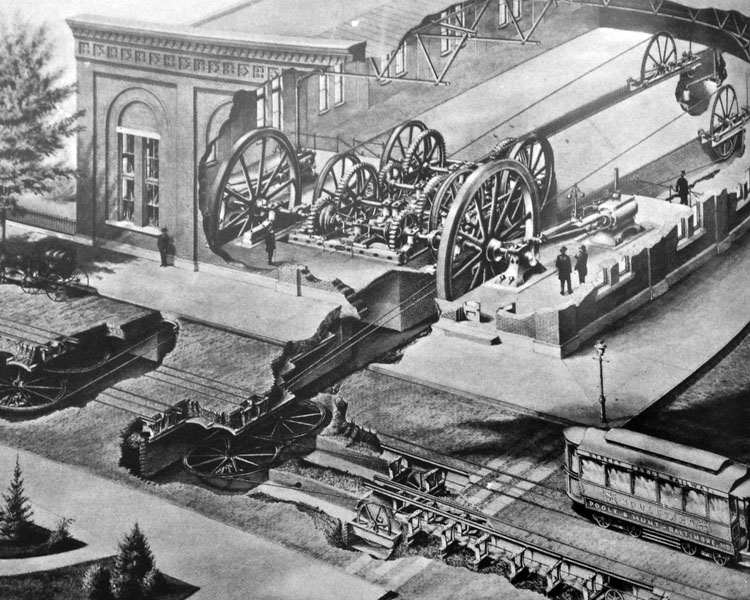 The End of the Chicago Trolley Era