Open House Chicago is always a fun and very architectural time. On top of the access this annual event gives to sometimes off-limit spaces, Open House just gives a great excuse to explore more of Chicago’s amazing architecture. This year, as I perused the options, my friend and I chose to explore the architecture in Lincoln Park. Lots of photos are in this post by the way!

Choosing a Chicago neighborhood to explore was tough. I’d been to all but one of the Open House Chicago events, and the options were starting to be slim, especially since I don’t have the patience to wait in line anywhere. And in the last two years, the variety of buildings for Open House Chicago has slipped off. Now the majority of the offerings of Open House Chicago seem to fall into the following categories: architecture firm offices, skyscraper lobbies, churches, and artist studios. The architecture firm offices are, well, offices, and I’ve been in most of them already. I’ve been in just about every skyscraper lobby to design and plan our interior architecture tours. And churches and artist studios are often open to the public.

We couldn’t make it down to South Shore, which looked interesting. However, we found a few intriguing listings for the architecture in Lincoln Park! 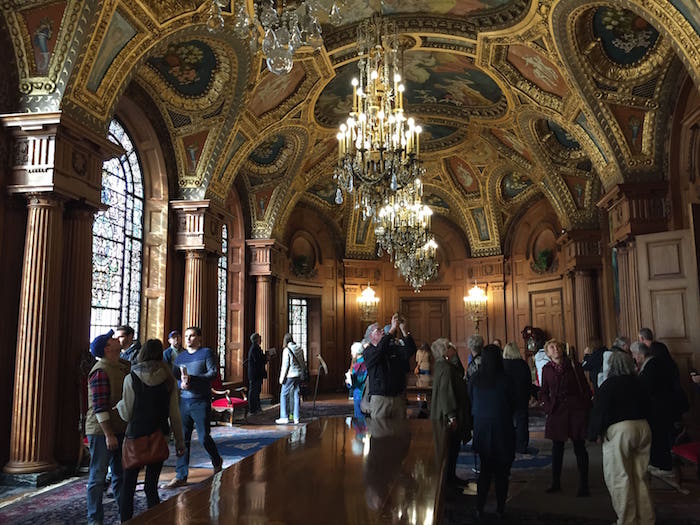 I’d read about the Elk National Veterans Memorial, but never managed to step inside myself. Wow! It’s like a piece of Europe in Chicago, with its marble columns, massive chandeliers, stained glass windows, frescoed panels, and baroque gold-leaf ornamentation.

The main space is modeled after the ever-influential pantheon with an oculus of stained glass. The shape of the building itself is inspired by the Temple of the Vestal Virgins in the Pantheon of Rome, making the building style as termed “neo-classical.” In the Grand Receptional Hall in the back, it is nothing short of baroque. It was built in the 1920s, of course the period of time in Chicago history we get the most opulent of architecture. 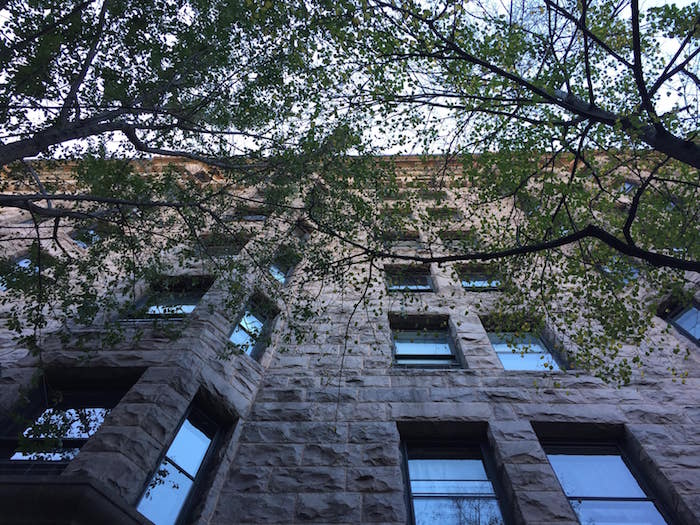 From the outside it looks like a historic apartment building for sure, but you would never expect the design and materials of the incredible old-timey interior. 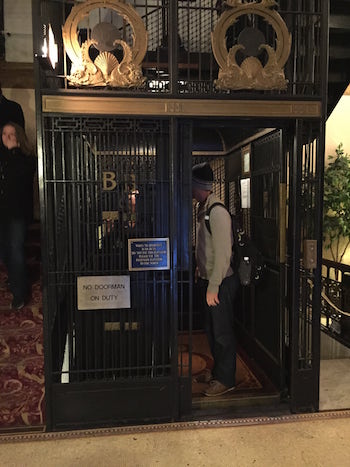 The original cage elevator is quite a novelty, pictured to the right.

Rumor is that Charlie Chaplin lived here, but he is probably second to Al Capone in being claimed as a resident or patron in just about any historic building in Chicago. It’s most likely just a rumor of history.

Originally called Lincoln Park Palace, this historic apartment building was built in 1893, when cast iron was all the rage. Cast iron is also used for the grating of the walkways that function as the hallway. 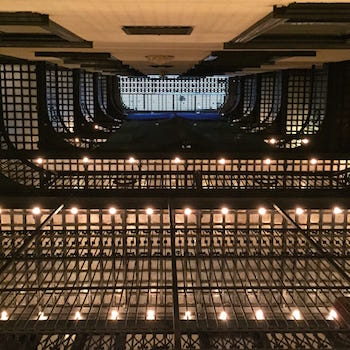 This photo shows the architecture of the hallways. The perspective is looking up from the lobby, and the grating are the walkways. Windows are on one wall at the top of the photo. Then the walkways between the different apartments are the grating that you see lit by the lightbulbs. The design is smart, as it maximizes spaces by making the light shaft not just a hole, but the hallway.

My friend and I preferred to prioritize our time. We hunted for exclusive spaces, rather than those we can access any time. But we were biking by the Moody Bible Institute and it’s one of those buildings where you know you’ve passed by it a million times (especially with all my visits to the Chicago History Museum archives for research). So we stepped in for this special example of architecture in Lincoln Park.

Their hospitality was impressive! Two gentlemen greeted us, opening the door, and then numerous guides inside were available to explain the architecture of this auditorium-like church. Or maybe it’s more like a theater. 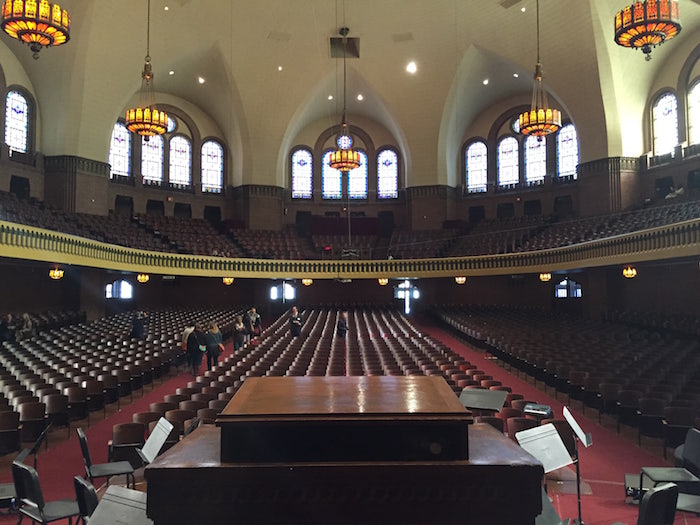 This picture is from the altar. It’s like a lecture hall meets theater meets church architecture. 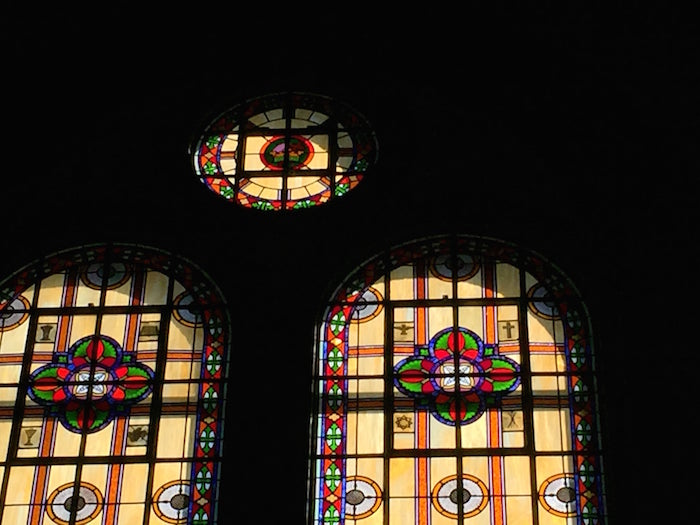 I loved the almost art moderne simplicity of the stained glass windows.

The biggest treat of Open House Chicago for me was the Sedgwick Studios. I originally thought, “Okay, sure, another artist studio in a former warehouse,” but this was a surprise. Metal sculptor Michael Young bought the building in the ‘70s, after it had been a decommissioned powerhouse for the train line next door, today the CTA brown line. 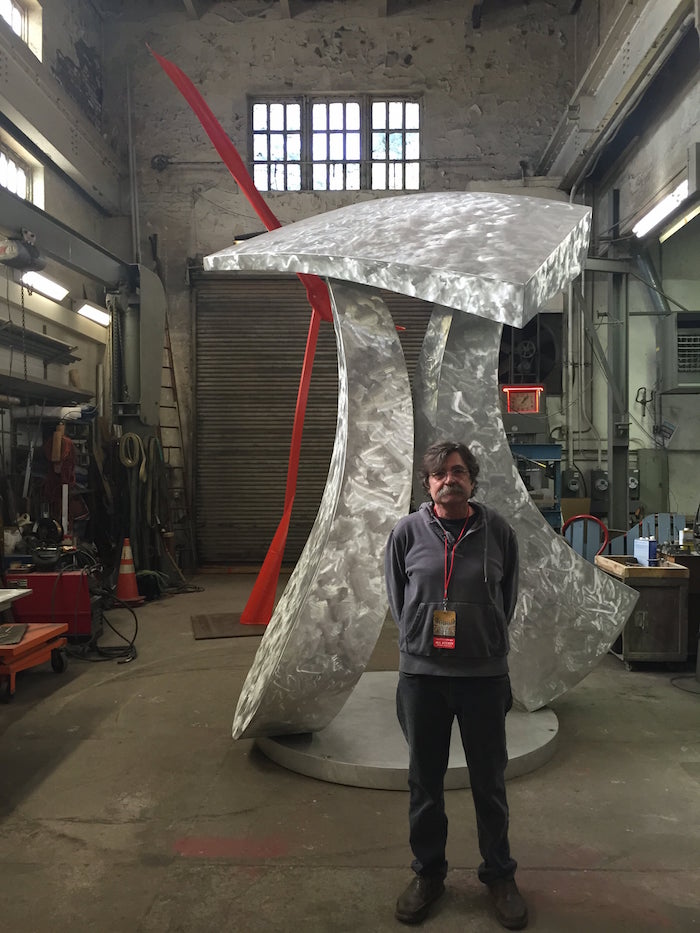 With Cabrini Green projects as neighbor, Young converted the building into his home and studio, using metal sheets to cover up the giant holes in the floor where transformers had been. 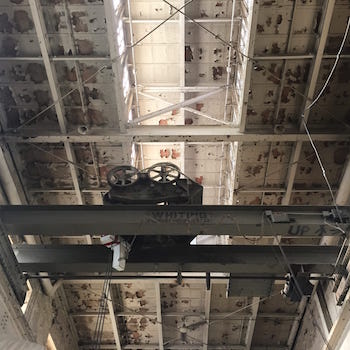 The architecture of Sedgwick Studios is unlike anything I’d ever seen. I was completely confused when I walked in. It has very tall ceilings, with windows way up high, and very, very thick walls.

The walls were constructed to be heavy on all sides, including the roof. Young said that’s because transformers can explode. In the case of an explosion, the building would then fall in on itself, rather than bursting out to neighboring buildings.

Today the studio still has apartments in it, as well as studio space that others rent out. Because we visit the Union Stock Yards Gate on our Big Shoulders Historic Bar and Food Bus Tour, I recognized the model for the Chicago Stock Yards Fire sculpture located next to it. The artist, Thomas Scarff, works in Sedgwick Studios as well.

The Value of Open House Chicago 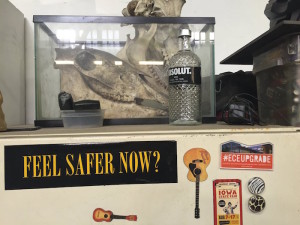 One of the things I love about going into other people’s spaces is just seeing character of a place through the objects arranged within it.

On our ride back to the neighborhood, we passed by the vast empty land that had once been Finkl and Sons steel plant. Just a short time ago, you could still ride by and see molten metal glowing and sparks flying. That is a kind of building I want to explore. Architecture is the primary theme behind Open House Chicago. Yet that lead directly to the history, the people who use the spaces, and what goes on inside today.