Teachers on Strike in Chicago? History of Teachers Unions

The hot weather isn’t the only aggressive heat you’ll find in Chicago this summer. The city has been overwhelmed with the feverish debate between Mayor Emanuel and Chicago Public Schools versus the Chicago Teachers Union. The contention between CPS and CTU involves many issues, some of the most talked about are CPS’s intentions to lengthen the school day by 40 minutes and a potential salary raise for teachers despite Chicago’s $665 million deficit. In May somewhere close to 5,000 teachers rallied down the streets of Chicago and  in June, 90% of union teacher members voted ‘yes’ to strike if a compromise could not be reached. While both sides have valid points, let’s take a step out of the hot box and see what light a little history can shed on this issue.

Sprinkle in the most important and unwavering player – a huge budget deficit – and throw in a superintendent resignation and you’ve got the story of education conflict in Chicago. Here is a Chicago Tribune editorial in 1980 quoting itself from 1965-1976: 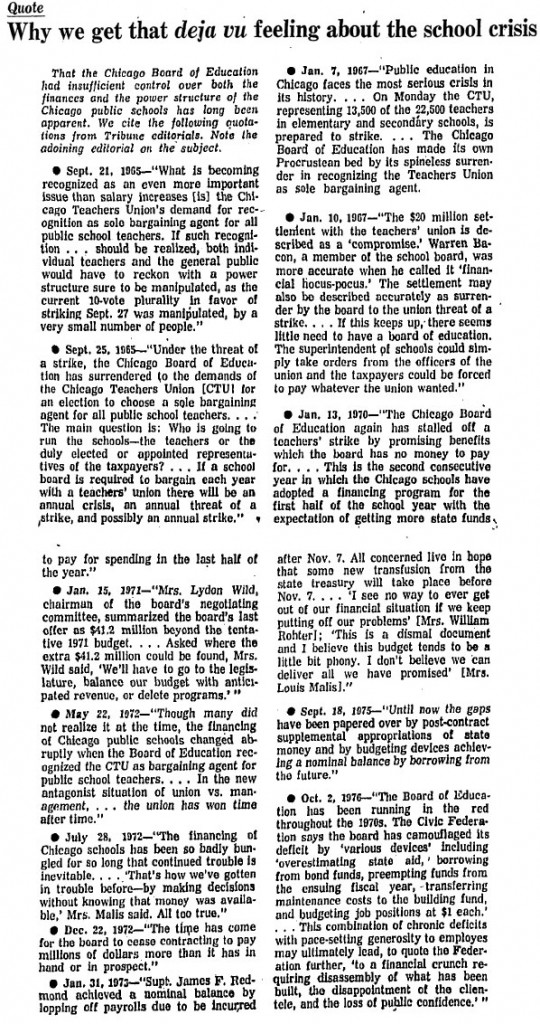 The precursor to the CTU was Chicago Teachers Federation (CTF), established in 1897. Female teachers founded the CTF. They made up 80% of Chicago’s public school teachers at the time. These mostly young, unmarried women wanted to advocate a uniform pay scale, teacher pensions, and better working conditions in the public schools. Despite attacks from the Board of Education on teachers rights to unionize, the CTF merged with other trade unions to become what we now know as the Chicago Teachers Union in 1937.

Teaching in a Divided City

Education inequality and segregation was the hot button issue in the 1960’s. Chicago’s African-American population made up 25% of the student body at this time. But they were all crammed into neighborhoods on the South and West sides. The overcrowded classrooms and the inequality of education based on race mobilized thousands to demonstrate and protest. Student dropout rates ranged from 50 – 100% in some schools. Overcrowded schools ran two short school sessions per day to accommodate more students. Superintendent William Willis’s added implement portable buildings to schools to help ease crowding. These were derisively called “Willis Wagons.” Willis was accused of caring very little for improving the quality of education in predominantly black schools. He resigned from the post in 1966.

This same year Chicago public teachers organized and officially elected the Chicago Teachers Union in 1966 as their bargaining agent. (By bargaining agent, I mean the CTU is the only representative to speak for its 30,000 teacher members.) The teachers’ first strike was a mere three years later. Teachers strikes always seemed to be looming in the future for the next 20 years .

Teachers also went on strike in Chicago in 1980. The CPS had no money to pay teachers approaching the Christmas holiday (teachers’ third payless payday). The walkout lasted ten days. The superintendent at the time proposed cutting $70 million and 1,700 jobs. This plan was very unpopular with both the Board and the union, and forced yet another superintendent to resign.

The last Chicago teachers strike was in 1987, and lasted 19 days. This was the same year that U.S. Secretary of Education William Bennett declared Chicago’s public schools the “worst in the nation.”

The education system in Chicago has had its ups and downs and is never without a good fight. As of now the CTU and CPS have thirty days to reach a compromise before the teachers can officially strike. 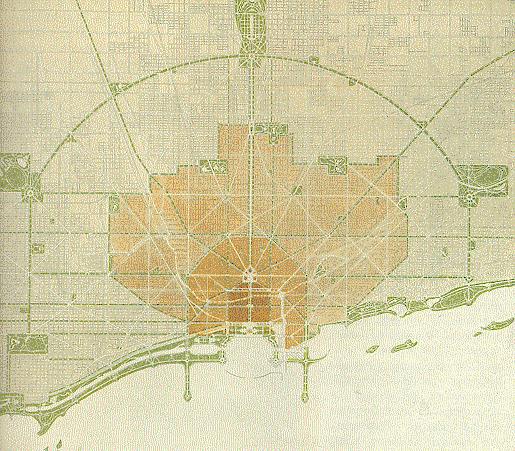